Order of the Golden Sabre

For something decidedly out of the ordinary, regular MidWeeker, Dave Cronin, recently attended a glittering function that delightfully illustrated the links between fun, wine and historical tradition.

Here is his report.

Two hundred years ago officers of the French cavalry under the command of Napoleon would celebrate victory in battle by opening a bottle of champagne but instead of searching around in their saddlebags for a corkscrew they would simply slice the top of the bottle off with a sabre. This is the art of Sabrage in which a sword's edge meets with the top of the bottle, the annulus, along the seam which is the weakest point just below the cork. 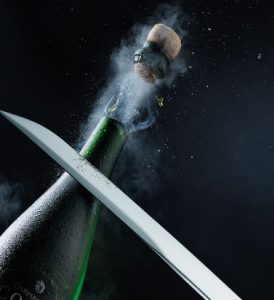 This proud and dashing tradition has been revived and can now be performed by any budding dragoon under the tuition of the Confrérie du Sabre d’Or (Club of the Golden Sabre) founded in France in 1986 – the UK branch was formed in 1999. The society holds various events around the country in which everyone attending can have a go at sabering a bottle of Champagne to become a Subreur the entry rank and the first step in the Confrérie du Sabre d’Or. Other ranks as you go up the chain are Chevalier Sabreur, Officier, Commandeur and Grand Commandeur.

On the 16th of August 2016 I was kindly invited to such an event at Smith & Wollensky a classic American steakhouse in the heart of London run by Operations director Nathan Evans who also happens to be a Grand Commandeur of the Confrérie du Sabre d’Or. The evening’s event was sponsored by Champagne house Perrier-Jouét who supplied bottles of their Grand Brut for sabering.

On arrival we were asked to sign a disclaimer while men in green cloaks (which signifies seniority in the society) were busy setting up arranging tables with suitably chilled bottles and a big heavy curtain in front to catch the bottle top as it flies from the neck.

The Grand Commandeur Nathan Evans introduced himself and gave us a quick introduction and history of the art of Sabrage ending with the immortal words “the only thing you can do with a Sabraged bottle is drink it”.

Introductions over Nathan then gave us a quick demonstration slicing the top of the bottle with elegant ease as the cork still firmly in the neck shot off with a loud pop into the curtain – accompanied by enthusiastic applause.

Soon after it was our turn. We were called up two at a time aided by Senior members Nathan Evans and David Herbert. Suddenly the room was filled with excitement as loud pops like gunfire filled the room as bottles were sliced with golden sabres as guests became Sabreurs after successfully hacking off the top of the champagne bottles, (Sabreur being the entry rank after completing the first slicing). After completion we were presented with the top of the bottle in a velvet pouch along with a Sabreur certificate.

The secret is to find the seam in the bottle and run the sword along the bottle in a smooth action with the blade not leaving the bottle. Then, hit the annulus (the rim below the cork) but make sure to follow through fully – as you would with a golf swing.

Here is a link to Sabrage and how it’s done….. 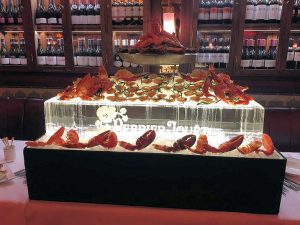 As the evening continued we were treated to a selection of fantastic seafood including oysters, lobster, crab and prawns from the North Atlantic as well as Smith & Wollensky’s famous aged cured steak, all washed down with the fabulous Champagne (see below for tasting notes).

Fabulous venue, fabulous hosts and a fantastic evening had by all, many thanks to Smith & Wollensky, Nathan, David and of course Perrier-Jouét. 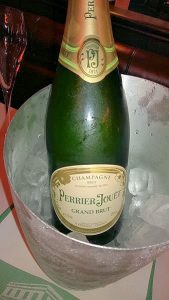 A light straw colour, lively mousse with a steady stream of fine bubbles.

Yeasty on the nose, slightly oaky with a hint of crisp apples and pears