Another of the three weekly Tesco promotions cycle starts today and you will find many old friends featured in it but, better still, I am told that another “25% off when you buy six (mixed if you wish) bottles” deal begins there tomorrow.

So I have picked out four wines that I think are already worth their list price (which is the one shown below) but become a steal with a 25% reduction. Remember though T's & C's do apply – not least that the promotion excludes Scottish stores – so check before you commit yourself.

As I try to do most weeks, there are also a couple of good value wines from other retailers.

Value from Gascogne again – but with two twists

South West France produces some impressive but inexpensive everyday wines but this white has two advantages – colombard is partnered here, not by the often used ugni  blanc, but with the more intense gros manseng and, secondly, the wine is made by the acclaimed Plaimont operation.

Enjoy then the sharp apple and lemon acidity of 2016 Finest* Cotes de Gascogne (£6.50 and 11% abv) and the herbal but crunchy greengage and conference pear fruit that it supports.

A spicy grape gets fresh!

Alsace’s gewürztraminer has a deserved reputation as a rich accompaniment for oriental food even though it is usually light on acidity. This version bucks the trend slightly with appreciably more freshness – but less viscosity – than normal.

So, do give a try to the gently acidic but cumin influenced 2016 Finest* Alsace Gewürztraminer (£8 and 13%) with faint suggestions of nuts and honey beneath its peach and pear fruit and evolving lychee touches.

Clare Valley has a long history with riesling grapes – probably because the early Lutheran settlers there brought German know-how with them. This version from the brilliant Tim Adams adds some distinctly Australian twists to the variety.

While there is a whisper of Riesling's classic kerosene finger-print at the outset in 2016 Tim Adams Clare Valley Riesling (£9 and 11%), this is quickly replaced by fresh lime based acidity balanced by a savoury texture to add a sense of richness.

But now for a red

Often the best value can be found in the less fashionable areas (this one is from Spain's Campo de Borja region) – especially when it involves the extra concentration old vines bring,  as this guy does.

See how the point is illustrated well by the soft, medium bodied 2016 Tesco Old Vines Tempranillo (£5 and 13.5%) which delivers ripe raspberry and sour cherry fruit with nippy acidity, mellow tannins and a savoury finish imbued with touches of cinnamon and herbs. 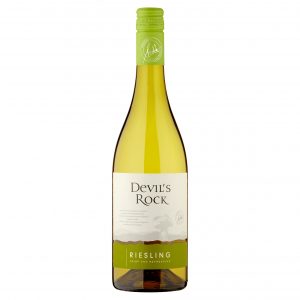 It was terrific to see this lovely inexpensive riesling included in the Top 50 Wines of Germany this year. It is from the increasingly trendy Pfalz region and made by the impressive team at the Binderer St. Ursula Winery.

Experience the tongue tingling grapefruit and lemon acidity of 2015 Devil's Rock Riesling (£5.99 at the Co-op and 12%) and the zesty but ripe white peach fruit that accompanies it.

No longer just part of the mix

Nice to find the once humble grenache (garnacha) now finding fame both sides of the Pyrenees in its own right – rather than just as a blending partner.

For a French example (from the stable of a master winemaker in Languedoc) seek out the soft but savoury edged 2016 JC Mas ‘Classic' Grenache Noir (normally £6.29 but down to £5.99 as I write – at Aldi and 13.5%) with its raspberry and dark plum fruit, firm acidity, limited tannin and touches of vanilla and cinnamon.

I’m a big fan of Tim Adams wines and this Riesling is a particularly good one , look out for the Tim Adams ‘The Fergus’ (blend of Grenache, Shiraz and a splash of Tempranillo) also excellent.
Bought a few bottles of the ‘Old Vines’ Tempranillo in the past (different label) and always enjoyed it for very little money.