Lidl’s Promotion – Back to France

A new Lidl promotion starts today and, like the very first “Claret Offensive”, the focus is largely on France – which ties in with the retailer’s current French Week focus.

This collection is slightly smaller than usual (26 wines) because a major promotion of Lidl's revamped on-going wine list is imminent – and will be featured here in November.

Meanwhile here is my take on the highlights from today’s list –and very impressive some of them are.

Don’t forget Bordeaux does sauvignon too!

Immersed as we are in assertive aromatic Marlborough Sauvignon, it easy to lose sight of how good Bordeaux versions can be, especially when the variety is blended with semillon – a 30% portion in this case.

So, the smooth and minty 2016 Bordeaux Blanc L’Horizon Cuvee Morgane (£5.99 and 12.5% abv) gives us nippy grapefruit and apple acidity but moderates its influence with touches of ripe peach.

Further south another blend catches the eye with an attractive fusion of white grenache, viognier and clairette from Languedoc but -hey ho folks – it is actually a pound cheaper.

Note then the depth and brightness of 2016 Costieres de Nimes La Grande Collection (£4.99 and 13%) that neatly enhances its greengage, apple and lemon fruit and the spicy mineral twist that accompanies it.

An attractive blast from the past

For the final white, we head for a slightly old school non- vintage chardonnay from California, which also contains a small percentage of other – less textured – varieties.

For sure there is butterscotch and oak centred mellowness to Chardonnay Rex Goliath (£4.99 and 13%) and the acidity is limited – but balance comes in the form of appealing touches of peach and orange which are beguilingly subtle.

Over now to the reds

We return to France for the first of our reds and to an area that was actually the first formal appellation acquired by Languedoc – Fitou – which here delivers a well priced red blend comprising almost equal parts of grenache and carignan with a dash of syrah.

Bold and floral raspberry and red plum components abound in 2015 Fitou Cers & Marin (£5.99 and 13.5%) where they are joined by mineral infused touches of clove and vanilla but given a burst of ebullience by well judged acidity.

Who says carignan is just for blending?

Without moving region we turn next to a 100% carignan version – and my personal top pick from this collection – which perfectly illustrates how skilled hands can fashion great wine from this underestimated variety.

Revel in the bright cherry, plum and elderberry fruit of 2016 Carignan Val de Salis (£5.99 and 13.5%) with good acidity, carefully reined in tannin and attractive concluding hints of vanilla and clove.

And, of course, a great value claret too

Stepping up a gear though we next consider a really well made 60:30 merlot: cabernet claret from an area sandwiched between the illustrious regions of Margaux and St Julien.

Underpinned by a graphite finish and leafy (typical claret) aromas 2012 Chateau Donissan Listrac Medoc (£10.99 and 13%) is centred around bramble, elderberry and red cherry fruit with firm acidity and gentle tannin but neatly supported by suggestions of vanilla and allspice.

Not forgetting a champagne bargain

Finally, we cannot have a Lidl French Collection without tasty and well priced champagne – a role fulfilled here by a pinot noir led rosé which also has a 30% contribution of meunier and 20% of chardonnay.

Small bubbles and a soft mouth feel are behind the favourable first impression that  Champagne Bissinger Brut Rosé (£14.99 and 12%) creates and those good feelings are reinforced by strawberry and red cherry fruit, lively acidity and a sweet edged, cream soda backdrop.

The Italia range, which has long been a reliable source of everyday Italian wine, has been given a new look and I was rather taken with the resultant rosé – which is perfect light lunch wine that adroitly avoids the over confected style of so much current rosé.

Good to see then that Pavia’s 2016 Italia Pinot Grigio Rosé (£7.79 at Waitrose or, currently, three for £16 at Morrisons and 12%) has an almost rhubarb type dryness behind its floral red cherry and red apple fruit and the delicate tangerine acidity that so effectively complements it.

Famous now for grapes not cattle 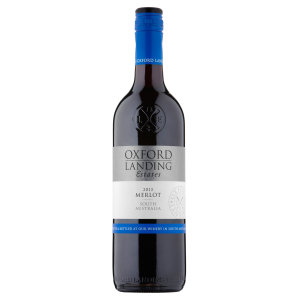 Speaking of reliability, here is another dependable producer (but from Australia) that uses as its name what must by now be the best known former cattle crossing in the world – Oxford Landing.

While light in body there is bold and fresh red currant and cherry fruit to 2016 Oxford Landing Merlot (£5.79 – instead of £7.79 until 10 October – at the Co-op and  13.5%) which is well supported by suggestions of aniseed, chocolate and baking spices, but only very gentle tannin.

Just had a message from Sainsbury's that they are “offering 25% off when customers buy 6 or more bottles of wine in store and online, valid between Wednesday 27th September [and] Tuesday 3rd October”.

They go on to add the usual caveats that “as always, the offer is valid on all wine, champagne, sparkling, sherry & port and also includes wines already on promotion” but I imagine that the usual exclusions will apply such as their convenience stores and all branches in Scotland.

While controversy rages over the details of official alcohol guidelines, no one seriously denies the damage excesses can do to your health.

Wine can be both enjoyable and beneficial so sensible drinking is obviously the key – and here are two simple tips to help.

First, resist the urge to finish up a bottle. That final “not worth keeping” two inches at the bottom is actually almost 20% of the content; seal it up and leave it for tomorrow!

Secondly, defy the fashion for large glasses. Studies (admittedly with “pick and mix” sweeties) show that people take over 50% more if big scoops are used.

So, if you can live with appearing gauche, try using champagne flutes for table wine when drinking at home. The content looks more generous (but is actually less) and, frankly, flutes are not the best way of serving champagne anyway.

Can I purchase Rex Goliath chardonnay in the UK.

Lidl were selling it but I will check the stock position with them for you ………. Brian

The Lidl team tell me all their stock has been exhausted but if you contact the importers – Constellation – they may have alternative suppliers. Their contact details are at http://www.cbrands.com/contact-us